Shop Local
because local matters
What do you love about this local business?
To post a recommendation, you must Register or Sign In.
High Voltage Tattoo & Piercing


About:
Since 2006, High Voltage Tattoo has been a passionate provider of specialized artistic tattoo design, consulting and piercing services. We stock only the highest quality body jewelry.

Originally published in The Batavian September 3, 2011 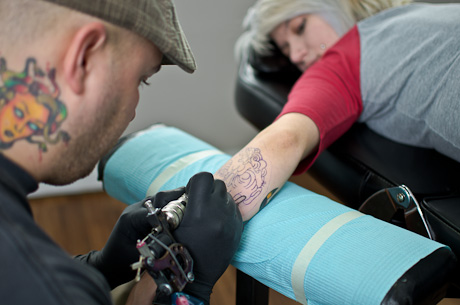 If you're an artist, even if you get your degree in graphic arts, there aren't many opportunities to do what you love.

Especially in a small town.

Mark Fanara got his degree from SUNY Brockport, just a few years after he got his first tattoo.

It didn't take him long to figure that maybe body art was a way he could avoid being a penniless artist or getting tied down by a suit and a tie.

He made a career decision -- to open his own tattoo parlor in his hometown, Batavia.

The start of the 21st Century turned out to be a good time to open up a tattoo business. People like Dennis Rodman and Brian Setzer helped make tattoos into a mainstream symbol of individuality. "There a lot of people who have tattoos that you would never know they have them," Fanara said.

From soccer moms to police sergeants, tattoos aren't just something only drunken sailors get in San Diego or Honolulu or bikers use to advertise their outlaw aspirations. They are no longer just dancing hula girls, red hearts dedicated to mom or anchors emblazoned with "USN." A good tattoo is a complex work of art.

There are whole magazines now devoted to covering the latest trends in skin art.

And Fanara and his staff can give anybody the kind of tattoo they want -- from a simple rose on the back of a shoulder, to a complex and detailed eagle with wings spanning a chest.

High Voltage Tattoo opened Ellicott Street in 2006 and about a year ago Fanara moved his shop to 110 West Main St., Batavia, giving him a high-profile location and a completely remodeled and modern parlor.

A week ago, The Batavian hung out at High Voltage while 36-year-old Fanara applied an ornate zombie face to the back of an arm of one of his apprentices, 18-year-old Ashli Hill, of York.

Hill, who does body piercing for High Voltage and is learning how to tattoo, said she's always loved art and was attracted to tattoos because her dad had them.

"I just remember my dad having this crappy looking panther and I just thought it was the coolest thing," Hill said. The zombie face was a drawing Hill found online and decided it was a theme she would like to develop in her own body art.

"I love scary movies," Hill said. "I love zombie movies. I decided that's a theme I would like to build on."

She also said she likes tattoos on her arms because, "it makes me feel like Popeye."

Fanara said he gets all kinds of people coming through his door, from the accountant looking for just a little something only his friends on weekends will see, to hardcore tattoo addicts who are looking to add a new work of art to their bodies.

Of course, many of his clients are repeat customers.

"It's one of those things where once you get one (tattoo), you just want more," Fanara said.

"It's really a mainstream art now," he added. "It's a way to personalize your skin and it's a way to express your personality."

While we talked, Fanara brought out a surprising issue: Genesee County is one of the few county's in the state that doesn't regulate tattoo parlors. NYS has some regulations, but in most counties, the health department conducts monthly inspections of tattoo parlors, and Fanara thinks in the interest of public safety, Genesee County should do the same.

Fanara said he follows all of the safety and cleaning recommendations common in the industry, from sterilizing his autoclave to using disposable needles, but he believes the public should be assured that all tattoos are applied with the same safety standards.

One danger he warned against is the tattoo applied by the hobbyist at the kitchen table.

"They just know nothing about safety," he said.

Licensing and inspections might help reduce the number of tattoos that aren't applied in a safe environment.

"It would be a good idea," Fanara said. "It would make it safer for everyone. I don't want to pay another fee or pay for a license, but it would just make getting a tattoo safer."