Batavia Downs: No. 8 in What Made Genesee County Famous

Originally published in The Batavian, Nov. 20, 2008, by Philip Anselmo. 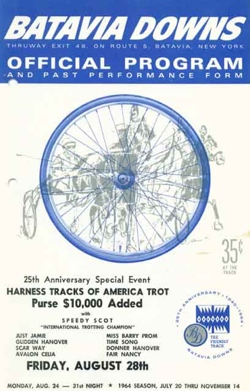 There's really no way to say it better than Pat Weissend:

"Traffic backed up at the New York State Thruway as thousands of people from the east and the west merged to spend their entertainment dollars on a chance to make more money at one of Genesee County’s best known attractions: Batavia Downs!"

So it is that Batavia Downs lands at No. 8 in the Holland Land Office Museum's countdown of the 25 Things That Made Genesee County Famous.

For more on Batavia Downs and how it made us famous, be sure to visit the Holland Land Office Museum Web site. While your there, you can peruse the other 17 "things" that have so far made the list. You can also hit up the museum's blog to leave your two cents about what should make it in the top seven.