Shop Local
because local matters
What do you love about this local business?
To post a recommendation, you must Register or Sign In.
Oliver's Candies

About:
Oliver's uses original family proven recipes, the very best ingredients, including real butter, cream, honey and other natural products. This, along with the skilled experience of the master candy maker, is a guarantee of continued success. Oliver's top seven employees have over 220 years accumulative service of loyalty and adherence to quality and customer service.
Follow @oliverscandies Tweets by @oliverscandies

Originally published in The Batavian 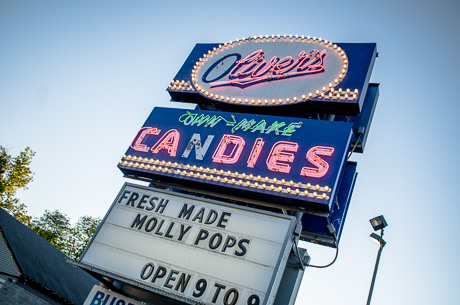 A picture of the marquee under the Oliver's Candies sign has been making the rounds on Facebook. Is "Molly Pops" a mistake, people want to know.

A molly pop, according to general manager Jeremy Liles, is a "peppermint molasses sucker covered with chocolate." And he adds, "Very good stuff!"

That's a nominee for understatement of the year.

I stopped by late today to get a picture and as I left, an Oliver's employee offered to let me take a sample sucker.

I took my first bite as I walked through the parking lot toward my truck. I immediately turned on my heel and headed back into the store. I bought a package of eight. Tonight, I shared one with Billie. She insisted that I share the rest.

"It's terribly delicious," she said. 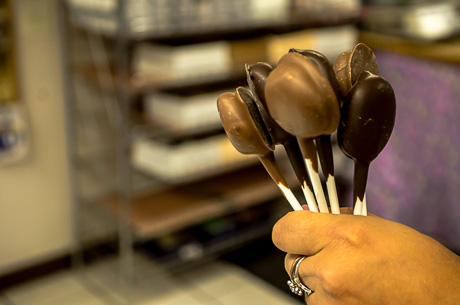 Everyone knows they have the best chocolate in Genesee County. Sponge candy is my favorite! Great place to shop for great candy gifts! Wonderful presentation in their shop.
Cheryl Hellert on Dec, 29, 2016

My church was able to do a fundraiser with Olivers and it was awesome. Also they have the best candy and ice cream sundaes around.
Pamela Morris on Dec, 28, 2016

I love that they have deliciousness for every season. I love their samples. Their chocolate tastes fresh. I can't even eat any store bought candies anymore unless it is bought at Olivers.
Graciela Benavides on Dec, 19, 2016

I love the creamy chocolate there. I love how they offer to wrap items if they are gifts, and they often have free samples, yum!
Sherrity Disanto on Dec, 13, 2016

Best place in WNY to get Chocolate! Sponge Candy is my ultimate favorite and they have the BEST!!!
Deanna Crawford on Dec, 13, 2016

A Batavia institution and a treasure. Love the chocolate choices. Everything is delicious.
Howard Owens on Dec, 13, 2016