Shop Local
because local matters
What do you love about this local business?
To post a recommendation, you must Register or Sign In.
RW Vapors

About:
We are an electronic cigarette company in Batavia,New York, USA. Our retail store also carries novelties, gifts, jewelry and more. We are located at 224 Ellicott St. All of our e-liquid is made here in the United States with all ingredients being sourced from US suppliers.

Originally published in The Batavian July 25, 2012 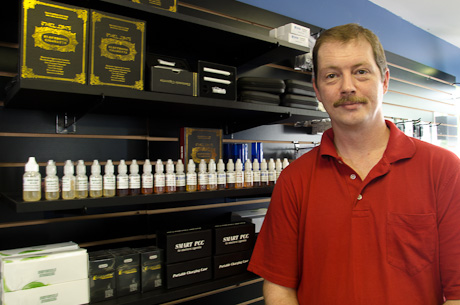 The way Russ Walker sees it, the day is coming when the government bans the internet sale of electronic cigarettes, just as the state has done with tobacco cigarettes.

When that happens, Walker said, storefront locations offering the modern alternative to tobacco-based products will be in a good position to grow.

A couple of weeks ago, Walker opened R.W. Vapors at 224 Ellicott St., Batavia.

E-cigs are cigarette-shaped devices that are designed to deliver the sense of smoking. They contain a liquid that is heated and vaporizes. The liquid can be flavored and may contain nicotine in varying amounts, from none to a heavier concentration, depending on the preference of the consumer.

"I can't make health claims about e-cigarettes," Walker said. "It is an alternative to tobacco. You're not getting all of the carcinogens. There's no combustion."

Typically, e-cig smokers are people who want to get away from smoking tobacco or use the product as a bridge toward quitting cigarettes.

While Walker sells novelties as well in his store, he said he won't knowingly sell his product as a novelty to somebody just looking to experiment with e-cigs.

"This isn't for anybody who isn't already on some form of nicotine," Walker said. "I don't recommend starting a nicotine habit if you don't already have one."

Walker also won't sell to minors, even though a state law regulating the sales of e-cigs based on age won't go into effect until January.

As for the liquid, Walker said he mixes all of the liquid himself.

"It's not imported from China," he said. "It's all made locally."

Walker said he sells a variety of flavors and can make custom-order mixes.

As for the novelties -- what he carries in his shop are decidedly old-school pranks and jokes. He said he knew his shop would need to offer a variety of products besides e-cigs so he picked a product line he said he's always enjoyed.

The store also carries some jewelry -- charms and bracelets.

RW vapors is the only vape shop we go to. You can call ahead to order and the service is fast. There are vape shops closer but this one is the best.
Christopher Gersitz on Dec, 29, 2016

I love this store. The owner and employees are always very nice and helpful. I have seen them show countless people how to start vaping and answer any questions you have. I have never walked in and not felt welcome. So happy they are open in Batavia.
Erika Unger on Dec, 21, 2016

LOVE THESE GUYS! They are great. Extremely knowledgeable and helpful. Just a great local business.
Sara Stockwell on Dec, 17, 2016