Originally published in The Batavian December 30, 2016 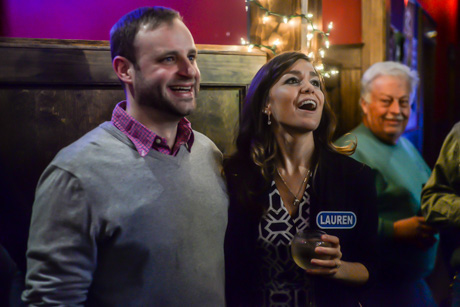 Lauren Fritz doesn't have regrets about that one spin. She knew she could solve the puzzle. The answer was obvious to her. "The National Mall in Washington." But she played an aggressive game and flicked the wheel around one more time. She hit the big black "Bankruptcy" card on the big wheel on Wheel of Fortune.

She's not embarrassed to admit, she said, that she's applied hundreds of times, more times than she can count, and during some periods in her life, she's applied every single day to get on the Wheel of Fortune.

She finally made it this year and last night, the episode where she played and hit that bankruptcy aired. The Smokin' Eagle BBQ & Brew in Le Roy hosted a viewing party for Fritz, her future in-laws, friends and anybody else who showed up, and a lot of people showed up.

She thought it was pretty awesome that her adopted hometown, where she hasn't even lived for that long yet, came out to cheer her on.

And the crowd cheered. They cheered when her face first appeared on the six or seven TV screens in the bar and she was introduced as a resident of Le Roy, NY, which meant more cheers, and they booed when the other contestants were introduced. They cheered when she solved the opening phrase. They moaned in anguish when she hit that bankruptcy.

The First Place winner on the episode pocketed $60,000 after qualifying for, and winning, the bonus round.

The way the game played out, Fritz thinks the guy would have made it to the bonus round even if she hadn't hit the bankruptcy. If she hadn't taken one more spin, she would have claimed only a few hundred dollars if she had solved the puzzle at that point.

The whole experience was great, said Fritz, who is originally from Grandhaven, Mich. Pat Sajak, Vanna White and the whole Wheel of Fortune crew were super nice, she said. It was touching how they opened their hearts, the studio and the set for two youngsters who spent the day at the studio as part of their Make-a-Wish Foundation wish.

The excitement and fun of the TV show appearance was enhanced, she said, by the getting the support she did from the Le Roy community at the Smokin' Eagle last night.

Fritz is engaged to Jake Whiting, son of Reid Whiting. Lauren and Jake met at the University of Michigan Law School. They will be married in September. Fritz is now an attorney in Rochester and Jake Whiting works with his brother in his father's law firm in Le Roy.

The couple will settle in Le Roy, she said.

"I appreciate everything everyone has done for me," she said. "It feels like my hometown. Everyone has been so nice." 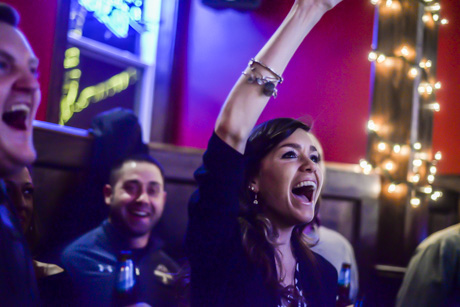