Shop Local
because local matters
What do you love about this local business?
To post a recommendation, you must Register or Sign In.
Adam Miller Toy & Bicycles

About:
Adam Miller Toy and Bicycle Shop, 8 Center Street, Batavia, NY was purchases in 1946 from Walter J. Davis. Mr. Davis started his wheel goods store in 1918 and in 1929 constructed a building at 8 Center Street to sell bicycles, tricycles, metal pedal cars, and other various types of toys. he also sold cigars and cigarettes and sharpened ice skates, lawn mower blades, and even strung tennis rackets to keep the business going. 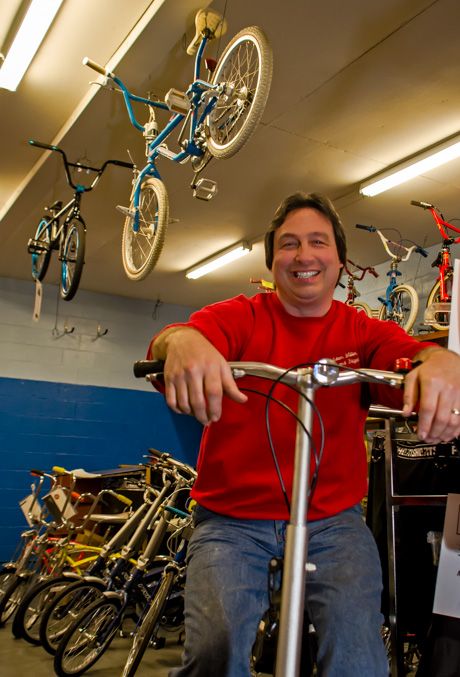 It's easy to spot customers who have never been in Adam Miller Toy and Bicycle. They tend to point at things and ooh and aah -- a lot. That's because the inventory is comprised of an amazing array of classic toys and amusements not usually found in one place, certainly not in Big Box stores.

But more important than retro toys that don't require batteries or electricity is the sublime customer service and personal attention that is more or less lost in the nexus of retail commerce today.

Reason enough, perhaps, that this 96-year-old institution on Center Street in Downtown Batavia is the 2013 Retail Business of the Year, so designated by members of the Genesee County Chamber of Commerce.

"I think it's cool," said owner John Roche of the unexpected accolade. "I guess being nominated by a friend of ours (attorney Michael Rivers) and getting people to vote for us -- it's a task and can't be the easiest thing to do. But I think it's cool. It's a good thing."

So is the toy biz in general, he says, because "It's not a real job. I guess it's one of those jobs where you go to work and it's not work. You have fun and you never work a day in your life."

The enterprise began as a "wheel goods store" in 1918 owned by Walter J. Davis. The building was constructed at 8 Center St. in 1929. Back then, people went to places for specific services; no one-stop-shops existed. There was, say, the baker, the blacksmith, the dry goods merchant, the green grocer, and a place where items with wheels were purchased and repaired. Davis also sold a few toys and tobacco products. He sharpened ice skates, lawn mower blades, and even strung tennis rackets to keep the business running.

In 1946, Adam F. Miller bought the Davis Wheel Goods store, which became Adam Miller Wheel Goods. In the mid-'50s, he put up the distinctive neon sign hanging out front. The business expanded in the 1960s to include toys and hobbies "for kids of all ages" and a year-round full-service repair shop.

Adam retired in the '70s and handed the business over to his children, Joyce Masse and Gary Miller, who ran it for 25 years during which time it garnered the reputation of being "The Neatest Store in Town."

The neon sign was restored in 1990. Long gone was the antiquated term "Wheel Goods" (although the legal corporate name remains Davis Wheel Goods).

Adam continued to visit regularly to make sure all was running smoothly. He died in 2000 at age 90. Subsequently, his children decided to retire themselves and the business was sold to the Roches, of Corfu. The families had known each other for years and were associates in the bicycle industry.

Moreover, "You don't have to deal with someone who can't make change if the register goes down."

They gladly do special orders, offer free gift wrapping, free layaway, and help with selecting the right gift or choosing the best bicycle.

"Ninety percent of our customers are loyal, repeat customers. They tell their friends, tell everybody about us. That's who I have to thank are these customers for keeping us around so long."

And he doesn't mean just his customers, but also those who've been patrons for 30 or 40 years.

"They bring their kids and grandkids and show them what a real toy store is."

Being available to chat and help select something special results in practically zero returns. They had two after last Christmas.

"I like to tell people, if you buy something and they don't like it -- keep it for yourself, and they often do."

The challenge in bringing in new customers is overcoming the assumption by some that because Adam Miller is a small, family-owned business it's therefore pricey.

"Once they come in here they get it. They can see that's not the case. It's just getting them in the door. We don't have a million dollar advertising budget, so for us, it's definitely by word of mouth that you get people in."

And when they walk through the door, the fun begins.

"You see the smiles on their faces, or the memories that come back to them that make them smile and have good thoughts." 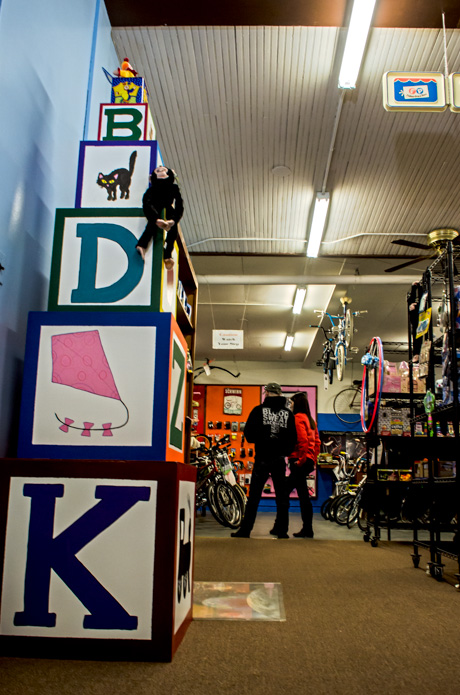 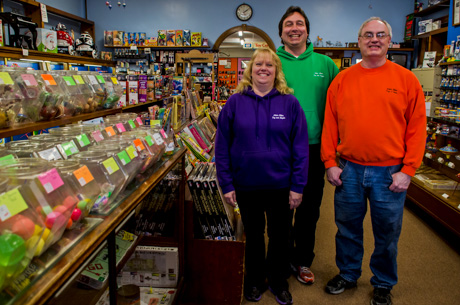 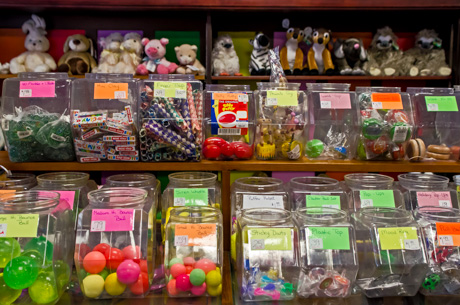 Video: A kid in a toy store

"Remember the toys you played with when you were younger? We still have them here at Adam Miller."

A trip down memory lane. Quality toys and bikes and service you won't find anywhere else.
Ann Sheelar on Jan, 11, 2017

not only can you buy a wide assortment of bikes and toys at adam millers you can also bring your bike to be repaired. the store is one of my favorite locations to find toys and get my bike fixed
Pamela Morris on Dec, 28, 2016

I've loved shopping here ever since I was young. Friendly, great assortment of gifts.
Rose Koch on Dec, 19, 2016

adam millers is a nice store to walk through and find that one toy or game. plus I bet you can find something in there that you played with as a child. wonderful store
Lori Schultz on Dec, 14, 2016

Take a trip back to your childhood with a visit to Adam Miller Toy and Bicycle Shop. You can always count on them to have great gifts for kids, while reminiscing about the great toys and games we had years ago. Simple toys that evoke thought, teamwork and imagination. Truly a gem!
Susan Walf on Dec, 13, 2016

Adam Miller has toys that no other toy store has! It's almost like going back in time! A must see!
Dawn Puleo on Dec, 7, 2016

The wow factor of the toy store is all of the old favorite toys are available brand new. That might seem nostalgic, but even kids who didn't grow up with these old favorites are charmed by the toys they find unfamiliar. The bike store and bike repair shop are also equally impressive.
Howard Owens on Dec, 5, 2016