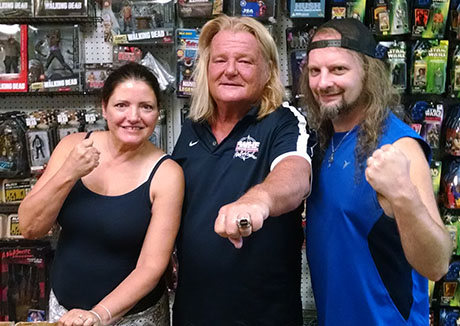 Originally published in The Batavian May 22, 2016 James "Jim" Fullington, better known by his professional wrestling ring name, "The Sandman," hams it up with Bill Hume, owner of Foxprowl on Ellicott Street, Batavia, during a visit to the store, where he met with fans yesterday.

Originally published in The Batavian November 20, 2015 The Clarion Hotel in Batavia will be filled this weekend with superheroes, space aliens, monsters and robots, all gathering to partake in Foxprowl-Con, the first local comic and collectibles convention.

Bill Hume, owner of Foxprowl Collectables on Ellicott Street, is the lead organizer of the event, which he said could draw from 2,000 to 4,000 guests from all over the region.

The convention will feature more than 100 vendors and several celebrities from the world of comics and sci-fi/horror entertainment, including Mark Dodson, from Star Wars and Gremlins, Kevin Duhaney and Jeff Parazzo, from Power Rangers, Adam Minarovich from the Walking Dead, Steve Cardenas, from Power Rangers, and Tyler Green and Rashaad Santiago, from FaceOff, among others.

These photos are from this afternoon while vendors were setting up. The convention opens this evening and continues Saturday and Sunday. For more information, visit foxprowl-con.com. Originally published in The Batavian August 8, 2015 Brian Sandstorm and his son Luke pose for a picture with professional wrestler Eric Young today at the five-year anniversary celebration of Foxprowl Collectables on Ellicott Street.

In five years, owner Bill Hume has grown the inventory, the variety and the floor space of his store.

When I remarked, "you've come a long way," he said, "You know, passion and hard work. It's what I love."

In the seven-year history of The Batavian, this is the first time we've covered both the opening of a new business and its fifth anniversary. Welcome to FoxProwl Collectables, Located at 440 Ellicott St in Batavia NY.
Check out our huge selection of Vintage, New Release toys, & Pop Culture Collectibles, This place has everything including graphics novels, movie memorabilia, and over 30,000 comic books at the lowest prices.
take a blast from the past and browse thousands of classic Action figures, statues, & Star wars collectibles.
We carry all of your favorites like The Walking Dead, Dr. Who, Sideshow collectibles, Godzilla, & so much more.
You’ve got to see this place to believe it. It’s like a giant toy museum you can get lost in for hours.
Allow our friendly and knowledgeable staff to help you find that perfect item, And enjoy shopping in a clean and well organized atmosphere.
FoxProwl Collectables can also special order anything you need.
Visit us on the web at FoxProwlCollectables.com for additional information.
Make sure to like us on Facebook to stay updated with Promotions and events.

This is our response video to Mark Callaway's video about how he got into X-Plus and general X-Plus collecting tip's!

Thanks for watching our debut commercial! If you like what you see, check us out on Facebook at www.facebook.com/Foxprowl-Collectables and now you know you GOTTA see us in person! 440 Ellicott Street, Batavia NY 14020!

Celebrating our 2nd commercial, and here's to more and more coming!

What do you do when just another day at the coolest collectibles shop on Earth turns into a long standing blood feud between the Jedi and the Sith?