Shop Local
because local matters
What do you love about this local business?
To post a recommendation, you must Register or Sign In.
Settler's Family Restaurant

About:
If you are going to be near Batavia on your travels, or if you live here and just haven't visited Settler's in a while, stop in for some of the best food in Genesee County in a clean, comfortable, and friendly atmosphere and at affordable prices.

Originally published in The Batavian December 9, 2015 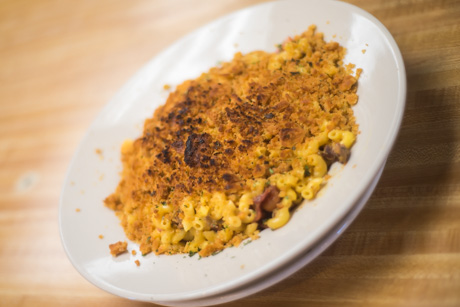 What started out as a daily special has become a daily staple at Settler's Restaurant -- Mac and Cheese.

"We'd see it around other places and thought we would give it a try," said John Spyropoulos. "People love mac and cheese these days. It's kind of a fad. We tried it and people loved it."

The eight-item special mac and cheese menu will be incorporated into the restaurant's regular menu next month, Spyropoulos said.

"We're already known for our homemade soups and our Greek salads, so if this becomes one more thing we're known for, that's good," Spyropoulos said.

The choices on the menu are:

Settler's regulars might detect a theme to the menu -- the options match many of the recipes on the restaurant's sandwich menu.

John's wife, Miranda, created the cheese sauce (milk, cheddar and American cheese, white pepper and garlic powder), but what really tops off the huge bowl of elbow noodles is the Ritz-cracker crumb topping.

"Now we have to make cheese sauce all the time," Miranda said. "We’re going through gallons and gallons of milk and butter."

We have been eating breakfast here for years, and now I've become a fan of their seafood mac&cheese' best comfort food around!
Wendy Stellrecht on Dec, 28, 2016

Great food and quik service. Especially when you come in for takeout and only have a 1/2 hour lunch break!
Terri Snell on Dec, 19, 2016

A diner's diner. We visit often for breakfast, lunch and dinner.
Howard Owens on Dec, 13, 2016