Shop Local
because local matters
What do you love about this local business?
To post a recommendation, you must Register or Sign In.
D & R Depot Restaurant

About:
.The D & R Depot Restaurant is still the place to gather - but nowadays people come from far and near to enjoy homemade cooking, to be pampered with attentive servers, to sit back, relax, and enjoy the atmosphere and the company.

Originally published in The Batavian March 24, 2013 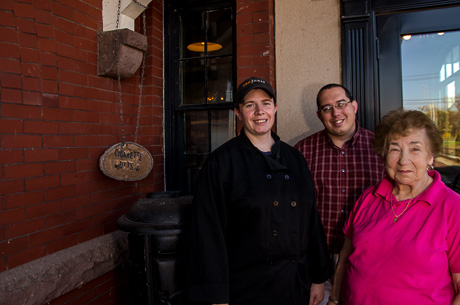 When Nancy Nickerson decided late in life to open a restaurant, she knew what she didn't want -- a cookie-cutter establishment that heated up frozen food and took other shortcuts.

"I wanted a building that looked different, I wanted something that would attract people," said Nancy, who opened D & R Depot Restaurant in Le Roy in 1991. "And partly that was also due to our menu. We were doing things from scratch. People don't do homemade things anymore. They don't have time, so we offer them that."

Combine unbeatable home-cooked flavor with "a different ambiance" and superior service and you have the recipe for success that has built a legion of loyal patrons.

Her business partners, Sean Valdes and his wife, Jennifer, who's the head chef, began working there 20 and 18 years ago, respectively. They both started as dish washers.

The building itself is an old train station, located at 63 Lake St. (Route 19). It was one of the busiest passenger depots in the area until it closed mid-1960s. The railroad line that currently travels the tracks is the Genesee-Wyoming-Southern.

Inside, things remain much as they were, but with fresh paint and decor, of course. There are elegant 20-foot-high ceilings, wainscoting along the walls and lots of windows. The ticket clerk's office is still there, and so is the luggage portal. Big Band-era music plays softly.

Look up in the main dining room and you'll see a little feat of engineering -- a choo-choo train on a platform, which is decorated seasonally. Everything on it hangs upside down; the train runs along its track upside down, too.

It's unique and kids love it.

Customers also enjoy the personal touches that D & R Depot offers. If a real train passes by the restaurant while you're there, you get a keepsake "wooden nickel." You can sign up to receive a $10-off coupon and a free cupcake for your birthday. They also have a word game to win gift coupons and a guessing game at Christmas season with a chance to get a $400 gas card.

There are gifts for sale -- like hand-painted button pins, scarves, stuffed animals -- and history books such as one about the Jell-O Gallery Museum (which is also in Le Roy). Patrons on the mailing list get a newsletter to keep up to date on dinner specials, contests, etc., and the Web site is kept current.

Their loyalty has enabled the proprietors to acquire Double L Rental, which rents tents, linens, chairs, tables, etc., for weddings, corporate parties and the like. And soon, their banquet hall at another Le Roy location will open with seating for about 175 people.

But it's the food that keeps people coming back for more.

A basket of fresh-baked muffins, scones and rolls is brought to each table at dinner time. Jen develops new dishes, such as the "No Nothing Pie." After some trial and error, she created a vegan apple pie without added sugar, no gluten, and nut free.

Old-fashioned chicken pot pie is a customer favorite. It's brought to the table, turned upside down onto the plate and served piping hot. The French onion soup is made (without a starter base) from slowly carmelized, fresh onions, a touch of sherry and thyme, topped with croutons from homemade bread and melted cheese. (A tiny pair of scissors is included with each bowl to snip strands of cheese!)

"People will always purchase if they perceive a value," Sean said. "If you're giving them a good product, good price, good service."

Originally published in The Batavian February 14, 2010 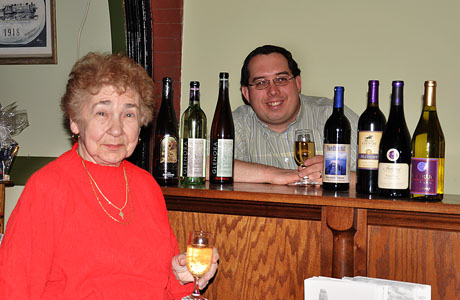 A couple of years ago the wine distributor for D&R Depot Restaurant in Le Roy convinced Sean Valdes that he should drop his dream of serving only New York-produced wines.

New York wines are too seasonal, he said. They would be too hard to keep in stock.The wine list would always be changing.

Then about six months ago, another distributor, one based in Batavia, came by and Valdes mentioned his desire to stock only New York wines. This distributor listened and agreed to work with Valdes on coming up a suitable wine list.

"We figured out that we could do year-around reds and year-around whites from New York," Valdes said. "New York wines are seasonal, so we choose larger vineyards and different choices that we could get all year around, but ones that wouldn't be so different -- not the peaches and the apricots -- not my crowd. Pretty much the standards."

And as of Wednesday, D&R Depot is the only restaurant, according to Valdes, outside of the Finger Lakes or Albany, to serve only New York wines.

"Champagne only comes from a certain region of France, otherwise it's sparkling wine, so even our sparking wine is from New York State. It's Goose Watch," Valdes said.

So why go to an all New York wine list? Valdes' answer:

"First, New York has some great wines. We focus on Finger Lakes, but there's a winery in this area. Long Island has a lot of wineries. There's even some in the Adirondacks. I think it's a neat thing. It's a niche market. It's always good to be local and it's what we strive for anyway, so this is a neat thing to fit in with that. And they're different. Even the riesling that you get from New York has a little bit different flavor than you would get from California or France or Australia. It's something different to offer our customers and it's been a big hit so far."

Some of the wines on the list include Fox Run Chardonnay from Penn Yan, Glenora Riesling from Dundee, Thirsty Owl Diamond from Ovid, Brotherhood Pinot Noir from Washingtonville, Heron Hill Game Bird Red from Hammondsport and Knapp Superstition from Romulus.

Pictured above with a selection of their wines are Valdes and Nancy Nickerson.

The food is very good and the atmosphere is awesome.
Gary DuBoise on Dec, 30, 2016

they have the best fish fry around, beautiful little restaurant. they will be catering our christmas luncheon at work, should be awesome
Penny Hogan on Dec, 14, 2016

We love the atmosphere and friendly service of D&R Depot, and it's an especially fun place around the holidays. The food is always top quality. We love the french soup (and all the soups) and the spinach salad. Always great main courses.
Howard Owens on Dec, 13, 2016