Originally published in The Batavian December 23, 2016 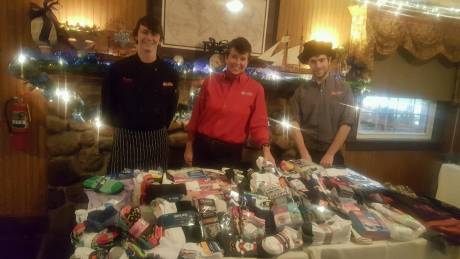 Steve Foster and Tim Adams, owners of the Red Osier restaurant, dedicated the month of November to charity for the local community.

The restaurant has always been closed on Thanksgiving, but this year, they opened for business, with many staff members donating their time to work; all the proceeds from meals served that day were donated to local charities.

During the month, the restaurant also raised $7,965 for Genesee Cancer Assistance. Foster and Adams added their own money to the pot and today turned over a $10,000 check.

Above, Red Osier staff members with some of the clothing items, including socks and underwear, collected for local donation.

Red Osier owners dedicate month to giving back to the community 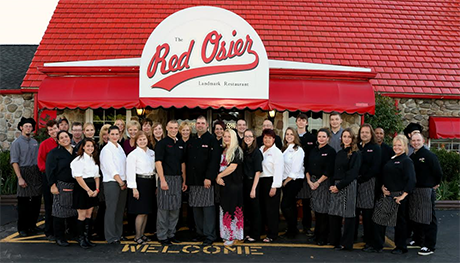 The Red Osier has a goal to become as community-orientated as its owners, Steven Foster and Tim Adam. Together with their staff, they have decided to rename November "Lovember" with a month of promotions to give back to the local community.

Bring in a package of new undergarments and socks during November, receive a complementary chef dessert. All items will be donated to restaurant employee Wendy Cappoli-Frongetta's grassroots organization "Spirits and Skivvies" that donates underwear and garments to local less fortunate throughout the community. Her goal is to restore dignity and comfort to the fellow human one pair of underwear at a time. There is an auction of donated items this Sunday from 12 to 5 p.m. at the Byron Fire Hall where all proceeds will support "Spirits and Skivvies."

On Thanksgiving, the restaurant will be open 12 to 5 p.m. This is the first year in the history of the restaurant that it has been open on this holiday. All -- 100 percent -- of the sales proceeds from the day will be split between Genesee Cancer Assistance and The Stafford Monument Committee, which is erecting a monument at the Stafford Four Corners to honor the past and present military personnel from Stafford. Throughout the month, we will have our annual buy a $50 gift certificate and receive a complementary $20 gift certificate as well.

It is extremely important to get our local businesses and their staffs involved in the holiday spirit. If we can make a small difference one can of vegetables or a package of underwear at a time, that's what we will do. We hope that our spirit of "Lovember" will resonate to other businesses within our area. 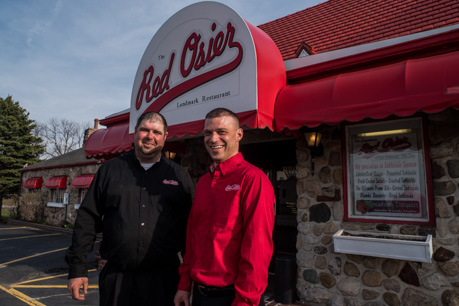 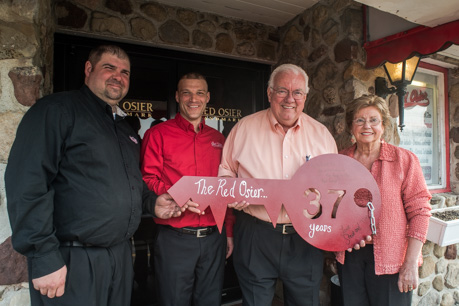 Owners of Red Osier announce plans to retire, place restaurant up for sale

Originally published in The Batavian September 28, 2015

After 36 successful years in business, Bob and Noreen Moore, owners of the Red Osier Landmark Restaurant in Stafford, N.Y., will retire and are seeking a buyer for the restaurant. The Moores are looking to sell their business to an experienced restaurant operator who will uphold their hard-earned reputation and continue employment for their qualified and dedicated staff. During the transition, The Red Osier Landmark Restaurant will remain open and will continue the wonderful quality service the restaurant is known for.

The Moores purchased the Red Osier Landmark Restaurant in 1979 in an effort to refocus their priorities and start a family business. Their sons, Robert and Michael, were 13 and 3 years-old, respectively.

“We moved from a four-bedroom home with an in-ground pool in Greece to a two-room apartment over the restaurant in the country,” Bob Moore said.  “We opened the Red Osier Landmark Restaurant and served 18 dinners the first Sunday we were in business. Today, we see 1,500 dinners through the kitchen doors each week, Tuesday through Sunday and one ton of beef each week.”

The Red Osier Landmark Restaurant quickly became famous for prime rib dinners, hand-carved tableside, and served to any temperature of the customer’s choice. The restaurant is also known for its Caesar salad, lobster/crab bisque, and banana foster flambé, each presented and prepared tableside. Today, it is the only restaurant in the Greater Rochester Area to offer this dining experience.

The Moore brothers became engrained in the family business early on, with Michael bussing tables by age 10 and serving as general manager as an adult. The eldest, Robert, also immersed himself in the business and successfully owns and operates Red Osier kiosks and concession stands as well as Red Osier Ridge Road Catering.

Red Osier kiosks and concession stands including The Greater Rochester International Airport, Total Sports Experience, Frontier Field and Red Osier Ridge Road Catering are not for sale and will continue their operations.

For years the Red Osier Landmark Restaurant has hosted a popular annual “Christmas in November” promotion, selling gift certificates as “buy $50 and get $20.” In light of the transition, the Moores will temporarily suspend the promotion this year as well as the sale of all gift certificates.

The Moores' retirement and the sale of the business is bittersweet for a family who has spent nearly four decades serving the Greater Rochester area, but according to Bob Moore, it is time.

“We are incredibly grateful to our employees, many of whom we consider our extended family, our loyal customers and the community for their support, friendship and patronage over the years,” he said. “But after 36 years in business and 52 years of a happy marriage, it is time for Noreen and me to enjoy our retirement with our family.”

The Moores look forward to another busy fall season ahead. With the exception of gift certificate sales, the Moores' intend to continue with business as usual until an experienced restaurant operator expresses interest in buying the business.

We Welcome You to The Red Osier Landmark Restaurant!

Getting to Know The Red Osier Landmark Restaurant